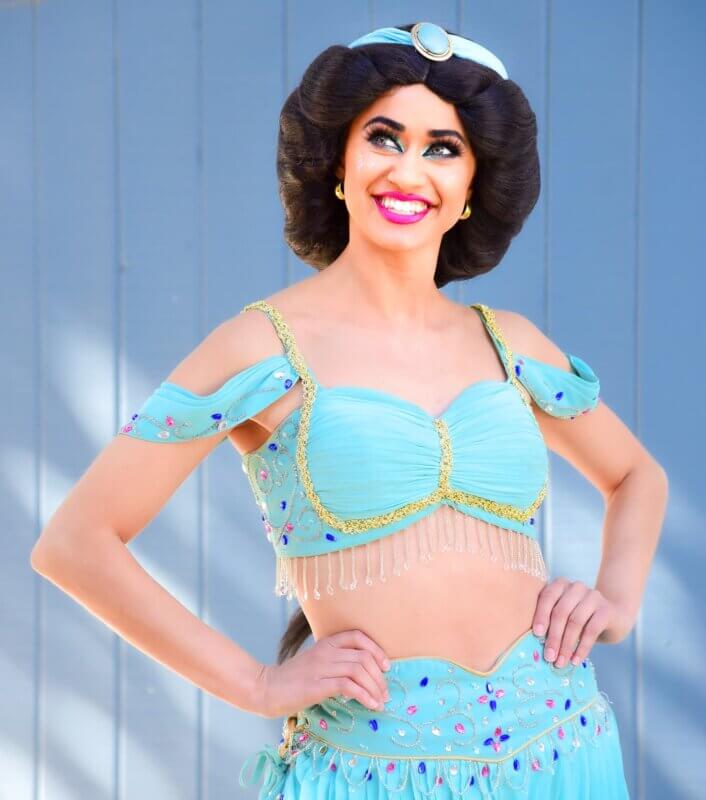 Little girls will be truly enchanted as she shares her story of palace life, being the daughter of the sultan, and how she came to love her prince.

Deep in the Arabian Desert, I, Princess Jasmine lived with my father, the Sultan of Agrabah, and my tiger, Rajah. The Sultan had said I must marry a prince—and soon. But I wanted to marry for love, not just to make my father happy!

In a nearby village, there lived a young man named Aladdin. His best friend was a monkey he called Abu. Aladdin was poor, but he had big dreams. “Someday,” he told Abu, “we will live in a palace!”

I refused to be married. So I disguised myself as a peasant and left home. In the marketplace, I accidentally stole an apple. A guard grabbed me, but Aladdin stepped in to protect me. Aladdin took me to his home. As we talked, we discovered we each dreamed of living a life different than our own. “I ran away, and I am not going back,” I said.

Then the palace guards burst in and seized Aladdin! I revealed myself as the princess and demanded Aladdin be freed. To my shock, the guards refused. Aladdin was taken away. While locked in the palace dungeon, Aladdin met an old man who helped him escape. The man took Aladdin and Abu to the Cave of Wonders. He wanted Aladdin to retrieve a magic lamp hidden inside. Aladdin and Abu found the lamp and a magic carpet! But as they left, the Cave began to rumble and shake and turn into molten lava! At the entrance, the old man wouldn’t help them. He was really the Sultan’s evil assistant, Jafar! Though stuck in the Cave, Abu had tricked Jafar and kept the magic lamp for Aladdin. When Aladdin rubbed it, a genie whirled out of the lamp to rescue them from the Cave and to grant Aladdin three wishes!

Aladdin’s first wish was to be a prince. Disguised as a wealthy prince visiting from another kingdom, Aladdin went to see me once again. That night, Aladdin took me on a magic carpet ride that we would never forget. Flying over deserts, mountains, and seas, Aladdin and I discovered a whole new world. The wonder and magic of the night brought us closer together. We were falling in love. “Good night, my handsome prince,” I whispered at the end of our flight. Then Aladdin kissed me.

But Jafar had an evil plan. He ordered his guards to throw Aladdin into the sea. Aladdin used his second wish to have the Genie rescue him. But then Jafar stole the magic lamp! Now the Genie had to serve Jafar! And the wicked sorcerer was holding me prisoner! As Aladdin sneaked into the palace to save me, I used my charms to distract Jafar. Aladdin tricked Jafar into using one of his wishes. “I wish to be an all-powerful genie!” proclaimed Jafar. He became an evil genie, and Aladdin trapped him inside a magic lamp for all time!

My father, the Sultan, told me that I could marry whomever I chose. I chose to marry my one true love—Aladdin! Aladdin used his final wish to free the Genie forever. In a flash, the Genie dressed to travel the world.

Book the Best Experience Ever!