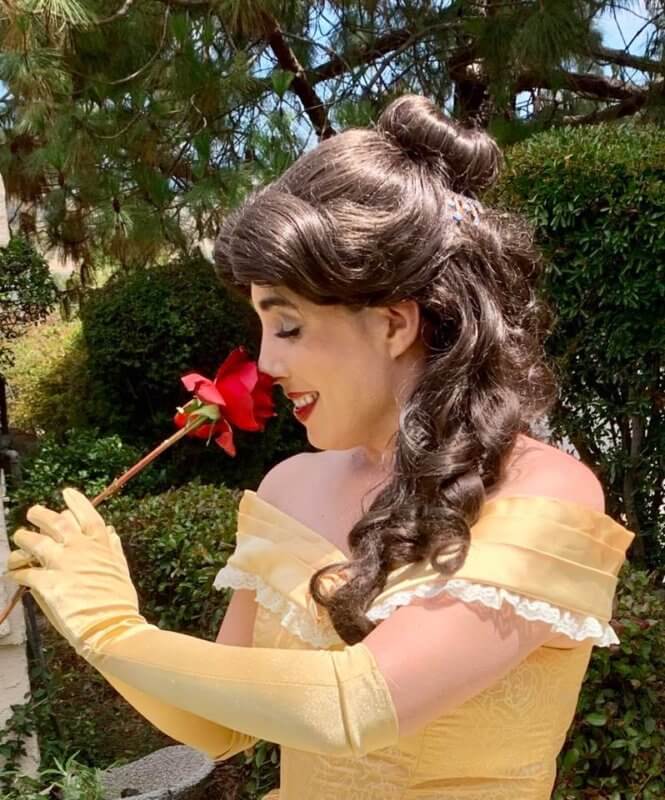 Beauty and the Beast

Book a PrincessParty
Story of Belle

Beauty arrives dressed in her breathtaking golden gown. She will share one of the most original and beautiful tales of true love, “Beauty and the Beast”,  A young maiden happens to discover an enchanted castle that is ruled by a monstrous beast.  With the help of her magical friends, Beauty discovers the “true” meaning of love.

Once upon a time, an Enchantress turned a handsome prince into a terrible beast when she discovered his selfishness. She left behind an enchanted rose.  If the prince did not find true love before the last rose petal fell, he would remain a beast forever.

In a village nearby, I, Belle, lived with my father, Maurice. More than anything, I wanted an adventure like those I read about in my beloved books. Gaston wanted to marry me, but I refused. I thought he was a beastly bore, and Gaston didn’t understand why I was always reading. “It’s not right for a woman to read,” he said.

My father, Maurice, was an inventor. His latest invention was an automatic woodchopper, which he was taking to a contest at the county fair. “You’ll win first prize!” I declared. On his way to the fair, Maurice got lost in the woods. A pack of wolves chased him to the gates of a nearby castle. Not sure what he would find inside, Maurice entered the castle grounds cautiously. Maurice could never have imagined the hideous beast that confronted him. Thinking Maurice had come to stare at him, the Beast was furious. Without mercy, he locked this unwanted visitor in the dungeon.

When my father’s horse came home alone, I went in search of my father and found him locked up. I begged the Beast for Maurice’s freedom. “Take me instead,” I offered. The Beast agreed, making me promise to stay in the castle forever! On my first night, I met the castle servants. The spell cast by the Enchantress had turned them into enchanted objects! They were funny, friendly, and treated me like a special guest. At dinnertime, I refused the Beast’s invitation to join him, which made him roar with frustration. He was anxious to end the spell – and felt that I was a sign of hope. Mrs. Potts, the teapot, and Lumiere, the candelabrum, told him to be patient and, above all, kind.

Later that night, I came upon the magic rose the Enchantress had left behind. As I reached out to touch it, the Beast appeared and grabbed the precious rose. “Get out!” he yelled.

I fled the castle on my horse but was attacked by the same wolves that had chased my father. Risking his life, the Beast saved me. In the days that followed, I began to see the goodness in the Beast.

One evening, the Beast again invited me to dinner. This time I accepted. After dinner, the Beast asked me to dance. As we whirled around the ballroom, the Beast realized he was in love with me. Because of his love, the Beast let me return home to see my father.

When Gaston heard me speak fondly of the Beast, he grew jealous and stormed the castle. Gaston stabbed the Beast and then was accidentally knocked off the roof. I pulled the Beast to safety. “Please don’t leave me,” I sobbed. “I love you.”

As I spoke, the last rose petal fell. Then a shower of sparks filled the air. The Beast began to transform…

The enchanted objects were filled with joy as they too turned back into humans and watched their prince and me fall in love anew.

Book the Best Experience Ever!